Please turn-in your money and stubs for the Roost #4 raffle of 2 season tickets to Ravens 2012 home games at this meeting.Â  The drawing for the raffle is at our July 23rd meeting.

Don’t forget – this is our last meeting before our July 14th Golf Tournament – so please, get your registration forms and fees in to Frosty Monday night!

Also, we have our Summer Picnic coming-up on Saturday, July 28th, at the Sterner residence in Catonsville.Â  Roost #4 supplies the beer, wine, burgers, dogs, buns, paper/plastic goods and condiments.Â  We’ll have a sign-up sheet at the meeting Monday for what dishes (appetizers, side dishes, desserts) everyone will bring to the picnic.Â  Stay tuned for more information soon!

News and Personal Thoughts:
Bumper Sticker seen on Rt 29 this week: “Go Back to Pennsylvania” conveniently in steeler black and gold.

Ravens:
SportsNation survey on which AFC North hold out will most likely be signed before the start of training camp has Mike Wallace in the lead, and Ray Rice 2nd. Joe Flacco comes in with a low percentage at 4th place… Forbes ranking of the richest athletes has Haloti Ngata at #12… The biggest question is how the Ravens will respond to the likelihood that Terrell Suggs will be gone for most (if not all) of the season. Most analyst indicate that this will cause the Ravens to fall short of last years success, making that dropped pass look more and more painful with each replay (real or visualized).

END_OF_DOCUMENT_TOKEN_TO_BE_REPLACED 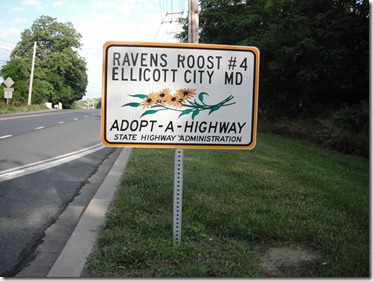 Ravens Roost #4 maintains a 1.3 mile stretch of Frederick Road in Oella as a function of the State of Maryland Adopt-a-Highway program.Â  We’re responsible for cleaning this stretch of road 4 times each year.Â  The Roost #4 crew on Saturday, June 16th was – Denise Stanco (our fearless leader!), Cathie Krajewski, Tom Hooks, Kel Habicht, Paul & Judy Cascio, and Candace & Jack Skurnik.Â  Clean-up only tookÂ 1 hour and 15 minutes – 9 bags were filled.Â  Thanks toÂ everyone for your time and effort!Â  Contact DeniseÂ if you’d like to volunteer for our next clean-up (August). 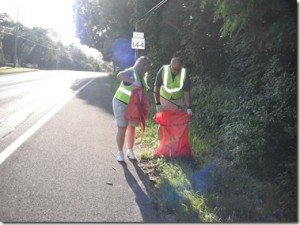 Now that the new Roost #4 website is up and running … we can bring back Scott “Iggy” Ichniowski’sÂ Weekly Ravens Report!Â  Iggy is the Roost #4 DirectorÂ of the Promotion of Ravens Football.Â  Please check-out Iggy’s weekly postings – they’re always informative and entertaining!

We finally have the new release of our Roost #4 website up and running!Â  Woo hoo!

Please check-out the posts forÂ our July 14th golf tournament and pictures from the OC convention.

Note that we’ve added all current Roost #4 members as subscribers to the site.Â  Every time weÂ add a new posting to the site you’ll receive an e-mail notificationÂ with a link to the new posting.Â Â If youÂ decide you’d rather not receive these e-mails you can unsubscribe and the e-mails will stop.Â  We hope thatÂ allÂ members remain subscribed since this will be the best way for us to disseminate information to all of our members.

Special thanks to Scott Habicht for his assistance getting the new site up and running!

Feel free to contact me if you have any questions.

The Ravens Roost #4 2012 Golf Tournament will be held Saturday, July 14th, at Hollow Creek Golf Club in Middletown, Maryland.Â  Cost to play this year is $120 per golfer (1st time the cost has gone up in 10 years).

C’mon out on July 14th and enjoy an afternoon of golf with our Roost #4 members and friends!Â  All proceeds benefit our Ravens Roost #4 charities.

Reminder Roost #4 … the member that sells the most hole sponsorships to our 2012 golf tourney wins free membership renewal for FY2013 in September – now a $50 value!Â  So please, get out there and sell those hole sponsorships!

Ravens Roost #4 grabbed not 1, but 2 trophies in Ocean City over the weekend.

The first place trophy was for winning first place in the “Novelty” division of the Raven’s parade. Â The roost put together a great parade outing with a theme based on race cars painted as RavensÂ opponents. Â  You’d better believe the Ravens car won that race.

The second place trophy was one by the co-ed volleyballÂ team. Â They fought their way through a field of 16 teams and three preliminary matches to make it to the final. Â While they didn’t win the final, they put forth a great effort and pulled a runner up trophy.

Check out pictures from the event below. Â If you have pictures that you would like to add to this post, please email Scott.

The new website is now live. Â If you see something missing letÂ ScottÂ known. Â Thanks!!

ORIGINS
In 1958 a group of Colts fans on a bus from the Franklintown Inn to a Colts football game decided to form a club to control seating arrangements on the bus and assure each passenger of a seat thereon. This arrangement proved so successful and enjoyable that the fans, all friends and neighbors (and season ticket holders), decided to explore the possibility of forming a Colts Corral. A meeting was held in November 1958 between seventeen of those Colt fans and members of an existing Corral. The decision was made to apply to Don Kellett, Vice President and General Manager of the Baltimore Colts, for a charter in the name of Colts Corral #4. On June 10, 1959, Colts Corral #4 was officially chartered at a banquet at the Franklintown Inn and was attended by 35 new members. Don Kellett was guest speaker and presented Corral #4 with their official banner. The late Chuck Thompson, sportscaster for the Colts, was the Master of Ceremonies on #4’s Charter Night.

And so, the Corral #4 story began.

With its origins at the Franklintown Inn (later the Millrace), Corral#4 also spent time at the following establishments over the years: Goetz’s, Vaccarino’s (later Cobblestone’s), Loverde’s, Buell’s, and the Judge’s Bench. A gradual migration from Baltimore to Howard County occurred as the years went on.

Club membership grew quickly, but, since a membership ceiling of 100 existed for Colts Corral #4, there was a waiting list to join the club.

COLT FANS TO THE CORE
Colts Corral #4 held a large block of tickets to Colts home games and most of the membership traveled together on a bus and sat together at the games. In addition to attending every Colts home game, members organized bus trips and flights to quite a few road games. Trips to away games often became full-week trips.

COLTS AND COMMUNITY
Corral #4 was active in a variety of charities including throwing Christmas parties at the James Lawrence Kernan Hospital and Industrial School of Maryland for Crippled Children, sending a group of kids to summer camp every year, volunteering and raising funds for the Rosewood Children’s Center and the Linwood Children’s Center.

Annual social events included a banquet to honor an Unsung Hero from the Colts, a banquet for the installation of new officers, numerous dances, auctions around Christmastime, bull roasts, crab feasts, trips to Hershey, and beginning in 1967, the Council of Colts Corrals Convention in Ocean City. One of the highlight trips was when a busload of 50 Corral #4 members traveled to Canton, Ohio for the induction of Johnny Unitas into the Pro Football Hall of Fame in 1979.

EVIL IRSAY
Bob Irsay, in 1984, moved the beloved Colts along with all of their memorabilia to Indianapolis. What a sad day it was, but the Colts Corral #4 story did not end here.

In 1985 Baltimore secured the USFL Stars and Corral #4 became Star #4 and bestowed their efforts upon this new team. Star #4 ran bus trips from the Judge’s Bench down to College Park to watch the Stars. Though the stadium in College Park was ‘dry’, it has been rumored that a number of contraband beverage packs were seen flying over the fence into the waiting arms of Star #4 members. When the Stars left after a year, the decision was made to return the name to Colts Corral #4.

Being without professional football from 1986 through 1993, discussions were held concerning disbanding Corral #4. It was decided to keep the club together.

Following a few years with no football, membership tailed-off in 1986 to around 50 members. At one point membership dropped to as low as fourteen members, some of which are still members of Ravens Roost #4 to this day. Mark “Jaybird” Golibart spearheaded the effort to keep Corral #4 together and others who stuck with the club during those dark years were George “Buzzy” Suter, Hildie Suter, Barb Peterson, Betty Golibart, and Henry “Shorty” Miller. The frequency of meetings went from monthly down to an ‘as-needed’ basis.

Roost #4 membership grew steadily over the first few years and skyrocketed with the NFL Championship in Superbowl XXXV. Roost#4 has been hovering at or slightly above 100 members ever since.

Roost #4 is still active in raising thousands of dollars annually for a wide variety of charities including the National Multiple Sclerosis Society, the Believe in Tomorrow Foundation, Special Olympics Maryland, Gilchrest Hospice of Howard County, the Ray Lewis Foundation, Big Ed’s Band Foundation, and many others.

In March 2005, Roost#4 awarded the first of two $1500 scholarships to two senior Howard County football players at their annual bull roast. Future plans are to continue the scholarships on an annual basis. Roost #4 raffles-off two season tickets to Ravens games to raise money for our Scholarship Fund and also holds a number of other annual fund-raising events including a bull and oyster roast and a golf tournament.

Roost #4 member social events include tailgate parties at all Ravens home games, road trips to a number of Ravens away games, an annualÂ Holiday Party, summer picnic, and of course, the annual Council of Ravens Roosts Convention in Ocean City.

Looking for a home to enjoy Ravens football
with like minded fans in the Ellicott City area?
Check out Ravens Roost #4 !!!
Roost #4Â meets on the 4th Monday of every month
atÂ Jilly’s in the Enchanted Forest Shopping Center onÂ Route 40Â in Ellicott City.

Many Thanks to Ravens Roost #4
for hangin’ in and helping to re-establish
the Baltimore Football Fandom Tradition!